Objective: We suggest a Maximum-Entropy estimator for the average Survival Time Difference (MESTD) between groups.

Methods: The estimator is based on the extra survival time, which should be added to each member of the group, to produce the maximum entropy of the result (resulting in the groups becoming most similar). The estimator is calculated only from time to event data, does not necessarily assume hazard proportionality and provides the magnitude of the clinical differences between the groups.

Results: Monte Carlo simulations show that, even at low sample numbers (much lower than the ones needed to prove that the two groups are statistically different), the MESTD estimator is a reliable predictor of the clinical differences between the groups, and therefore can be used to estimate from (low sample numbers) preliminary data whether or not the large sample number experiment is worth pursuing.

Conclusion: By providing a reasonable estimate for the efficacy of a treatment (e.g., for cancer) even for low sample data, it might provide useful insight in testing new methods for treatment (for example, for quick testing of multiple combinations of cancer drugs). 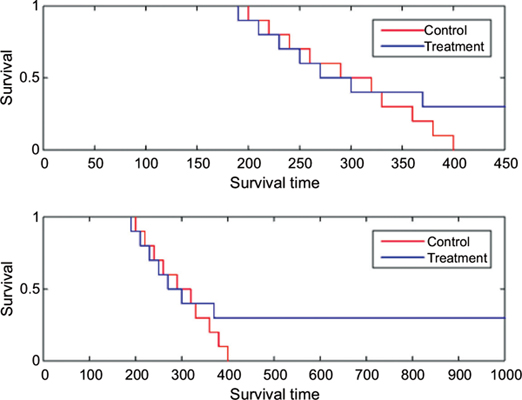